As reported on www.cnn.com today, August 6:

“The U.S. Senate confirmed Judge Sonia Sotomayor, in a 68-31 vote, as the first Hispanic justice on the Supreme Court.    Nine Republicans backed her nomination. The 55-year-old federal appeals court judge becomes the 111th person to sit on the high court, and the third female justice. President Obama welcomed the vote, saying he has “great confidence” in Sotomayor.”

The panel’s 13-6 vote for Sotomayor masked deep political divisions within GOP ranks about confirming President Barack Obama‘s first high court nominee. Just one Republican, Sen. Lindsey Graham of South Carolina, joined Democrats to support her, although four others have said they’ll vote for Sotomayor when her nomination comes before the full Senate next week — and that number is expected to grow.

The near-unanimous Republican vote against Sotomayor on the Judiciary panel reflected the choice many GOP conservatives have made to side with their core supporters and oppose a judge they charge will bring liberal bias and racial and gender prejudices to her decisions. Others in the party, however, are concerned that doing so could hurt their efforts to broaden their base, and particularly alienate Hispanic voters, a fast-growing segment of the electorate.

Still, Republicans pointed with particular concern to Sotomayor’s record on gun and property rights, as well as a much-discussed rejection by her appeals court panel of the reverse discrimination claims of white firefighters denied promotions. And every GOP senator who spoke alluded critically to the now-infamous remark Sotomayor made in 2001 that she hoped a “wise Latina woman” would often reach better conclusions than a white male without similar experiences.

Sotomayor dismissed the comments during her confirmation hearings as a rhetorical flourish gone awry, a defense that rang hollow with many of her critics. 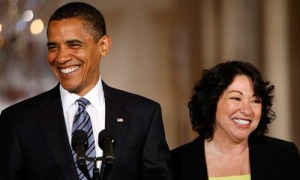